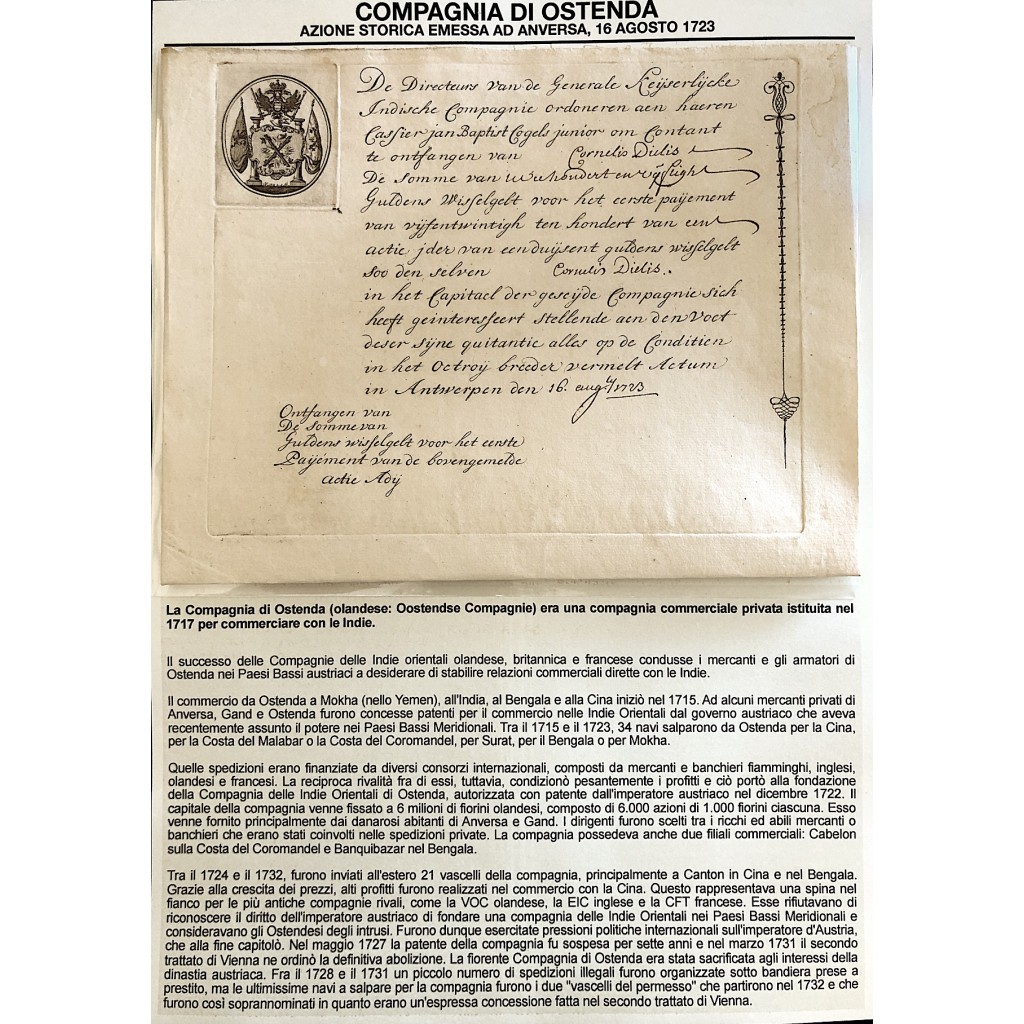 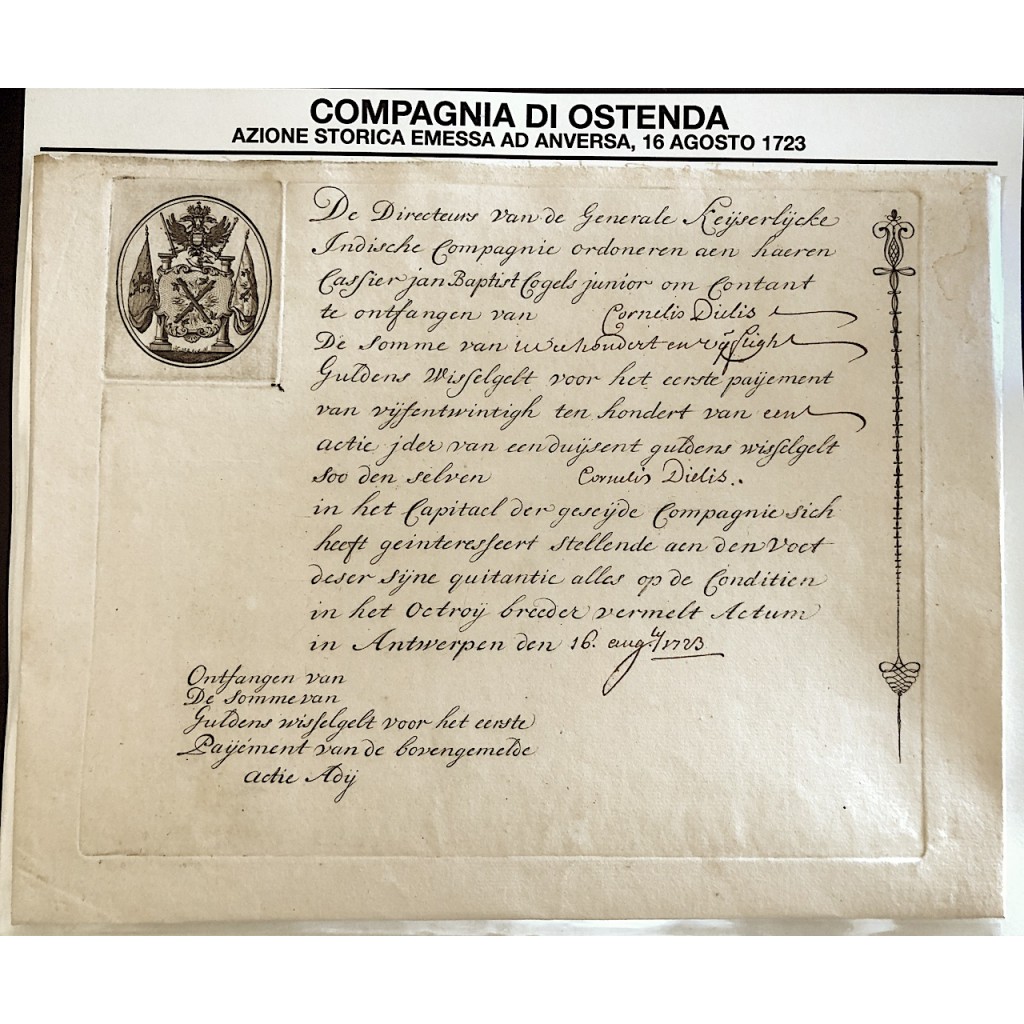 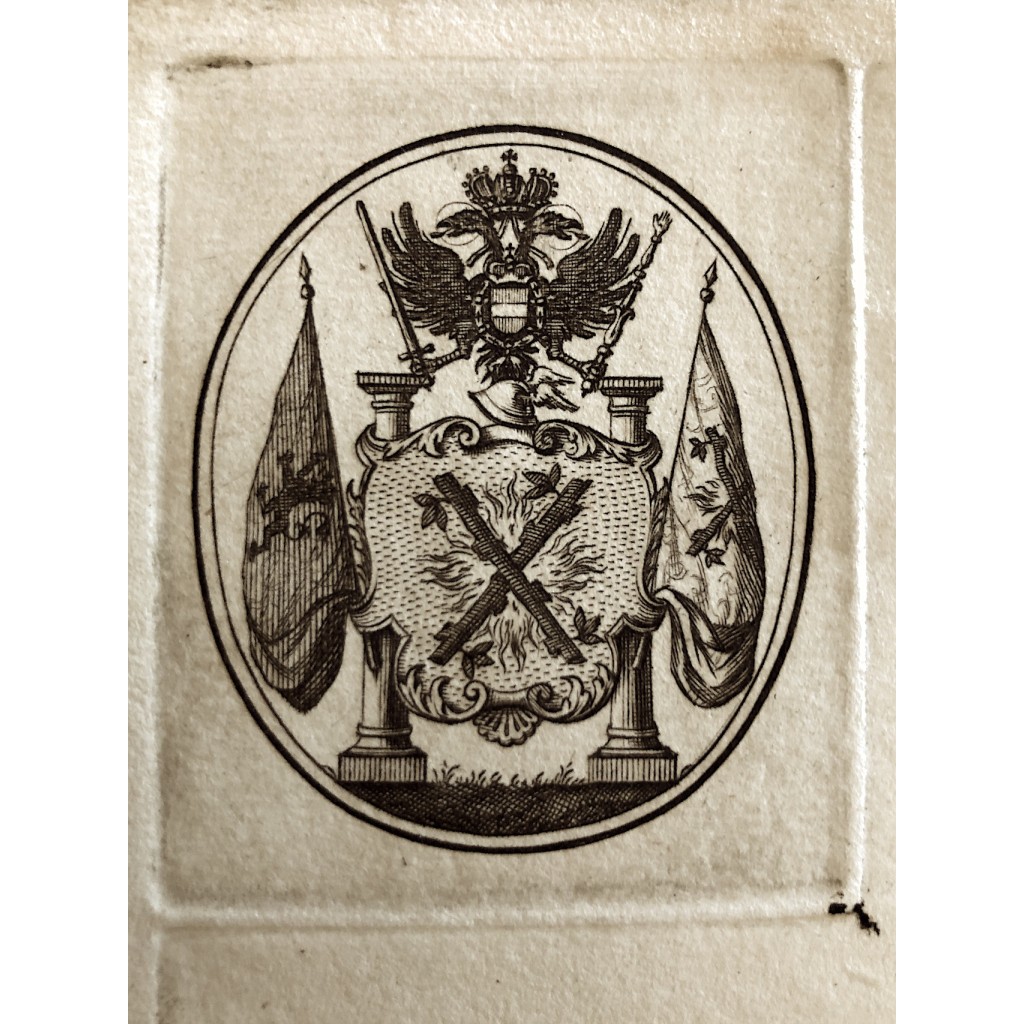 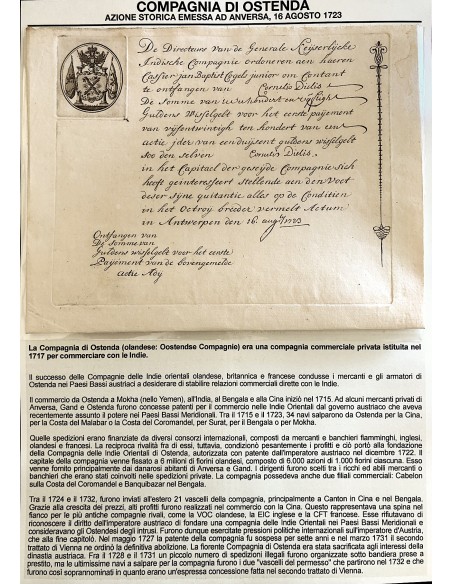 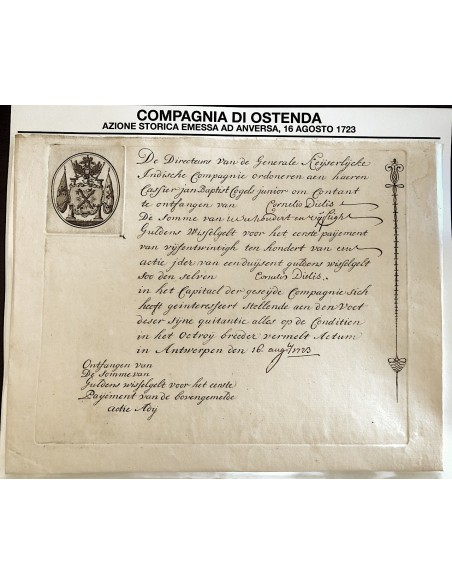 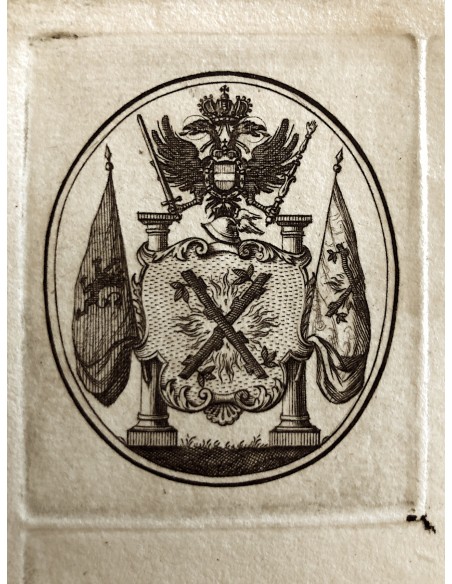 The Ostend Company (Dutch:  Compagnie, or Generale Indische Compagnie, French: Compagnie d'Ostende; or, in full, Compagnie générale établie Pays-Bas Autrichiens pour le Commerce et la Navigation aux Indes)[a] was a chartered trading company in the Austrian Netherlands (part of the Holy Roman Empire, currently Belgium) which was established in 1722 to trade with the East and West Indies. No Austrians were involved or employed.

For a few it provided strong competition for the traditional British, Dutch and French colonial trading companies, notably in the lucrative tea trade with China.[1] It established two settlements in India. Despite its profitability, the company was eventually ordered to close down in 1731 after the British exerted diplomatic pressure on the Holy Roman Empire, fearing the company's effects on their own traders. Its disestablishment was made a precondition for the Treaty of Vienna and for creating an alliance between the two states. The Ostend Company can be considered the first attempt by the Holy Roman Empire to monopolise trade with the East Indies; the second being the much less-successful Austrian East India Company, founded in 1775.

The success of the Dutch, British and French East India Companies led the merchants and shipowners of Ostend in the Austrian Netherlands (part of the Holy Roman Empire) to want to establish direct commercial relations with the Indies. The trade from Ostend to Mocha, India, Bengal and China started in 1715.[2] Some private merchants from Antwerp, Ghent and Ostend were granted charters for the East India trade by the Habsburg government of the Austrian Netherlands, which had recently gained control of the territory from Spain. Between 1715 and 1723, 34 ships sailed from Ostend to China, the Malabar or Coromandel Coasts, Surat, Bengal or Mocha. Those expeditions were financed by different international syndicates composed of Flemish, English, Dutch and French merchants and bankers. 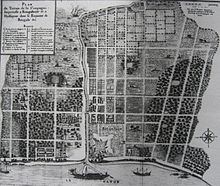 View of the Ostend Company's factory in Banquibazar

The mutual rivalry among the syndicates weighed heavily upon the profits and this resulted in the foundation of the Ostend East-India Company, chartered by the Austrian ruler Charles VI, in December 1722. The capital of the company was fixed at 6 million guilders, composed of 6,000 shares at 1,000 guilders each. It was mainly supplied by the moneyed inhabitants of Antwerp and Ghent. The shares were issued on the Antwerp Exchange on 11 and 12 August 1723,[3] with 3,037 of the shares coming to be held by 54 major investors, mainly Antwerp merchants.[4] The seven directors were chosen from leading figures in trade and finance: Jacques De Pret, Louis-François de Coninck and Pietro , from Antwerp; Jacques Maelcamp, Paulo De Kimpe and Jacques , from Ghent; and the Irish Jacobite Thomas Ray, a merchant and banker based in Ostend.[5] While the ships sailed from Ostend, the company's offices were in Antwerp.[6] One of the leading shareholders was Leopold Philip, 4th Duke of Arenberg.[5] The company's shares proved exceptionally profitable, providing a 15 return.

Between 1724 and 1732, 21 company vessels were sent out, mainly to Canton in China and to Bengal. Thanks to the rise in tea prices, high profits were made in the China trade. Between 1719 and 1728, the Ostend Company transported 7 million pounds of tea from China (roughly half of the total amount brought to western Europe), which would be about the same as British East India Company during the same period.[1] 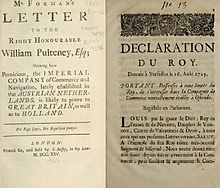 Treaties condemning the Ostend Company as "pernicious" to both British and Dutch interests (left) and a 1723 law forbidding French subjects from investing in the company (right).

From the outset, the new company provoked the open hostility of the other established East India companies which feared its formidable Imperial patronage and the fact that many of the new company's employees in the East were renegade servants of the English, Dutch or French companies, who brought with them their experience in the Eastern trade. Furthermore, in order to attract foreigners with experience, the Ostend company allowed them generous allowances in terms of cargo space for private trade, something that was anathema to the existing monopolistic companies.[7] Despite hostile acts from its competitors, the new company was quite profitable from the start and, by 1726, was able to declare a 33 dividend.

However, in May 1727, the Emperor, under pressure from the British mostly, suspended its charter for seven years and, in March 1731, the Second Treaty of Vienna ordered its final abolition.[1] The flourishing Ostend Company had been sacrificed by Charles VI in order to secure the recognition of his daughter, Maria Theresa, and thus his dynastic succession.[1] Between 1728 and 1731 a small number of illegal expeditions were organized under borrowed flags, but the very last ships sailing for the company were the two "permission-vessels" that left in 1732 and were a concession made in the Treaty of Vienna. The factory at Banquibazar, then under direct Imperial ownership, lingered on until well into the 1740s.[8] The company officially ceased trading on 16 February and was wound up on 16 February 1737.[9] Although officially disbanded, the shareholders secretly maintained the company as a vehicle for pooling investment until 1774.[10] Many of the company's investors also became involved in the Swedish East India Company.

In the 1770s Austria re-established a colonial trading company, based on the model of the Ostend Company, to take advantage of the ongoing war between Britain,  the Dutch Republic to take over a share of these countries' trade with India and China. This was the Société impériale de Trieste et Anvers, or Société de Trieste, also known as the Antwerp Company, founded in 1775 by William Bolts and Charles Proli, which was based in Ostend and Trieste and operated until 1785.[11]

The ships used by the Ostend Company were medium-sized, with an average water displacement between 200 and 600 tonnes. Many were partly, or even completely, crewed by foreign sailors from England and elsewhere.[12] 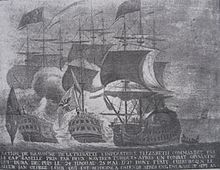 Barbary pirates capture the Impératrice Élisabeth of the Ostend Company, 1724
This list is incomplete; you can help by expanding it.