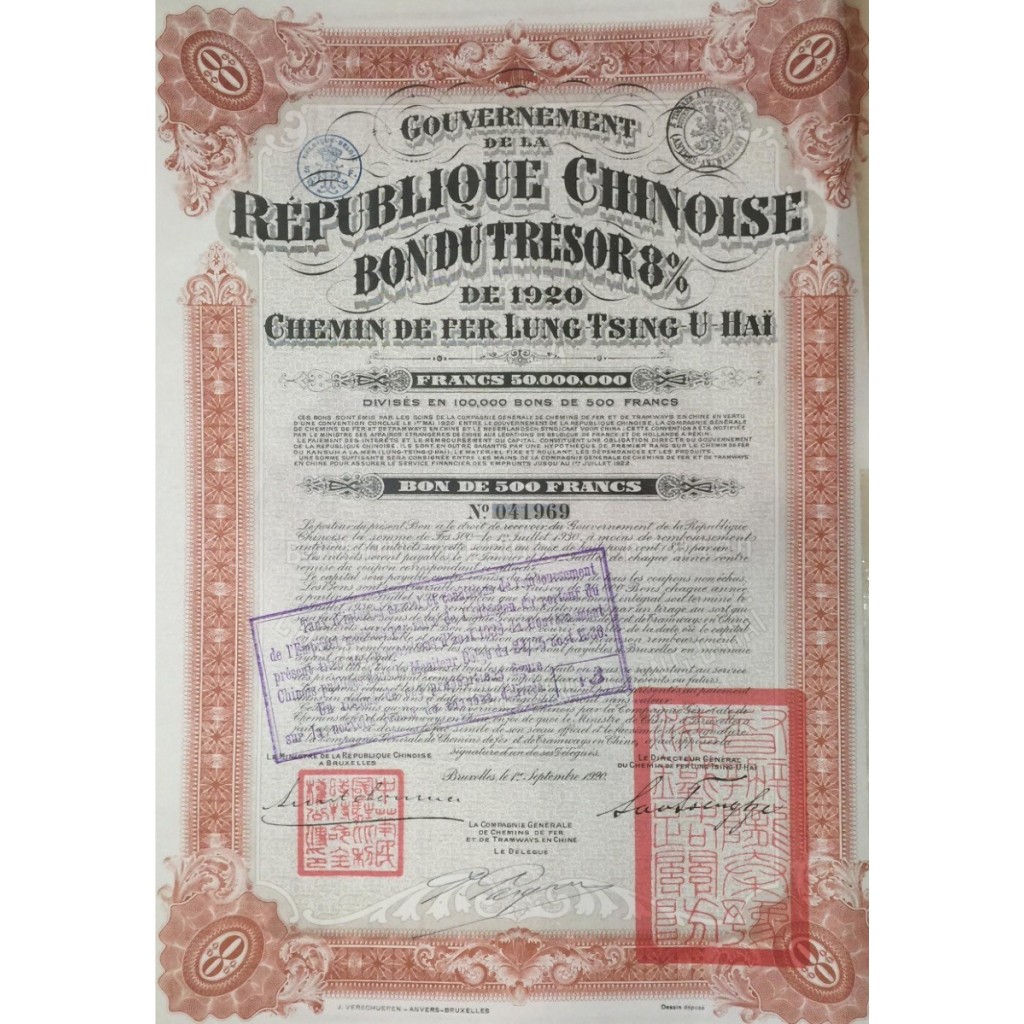 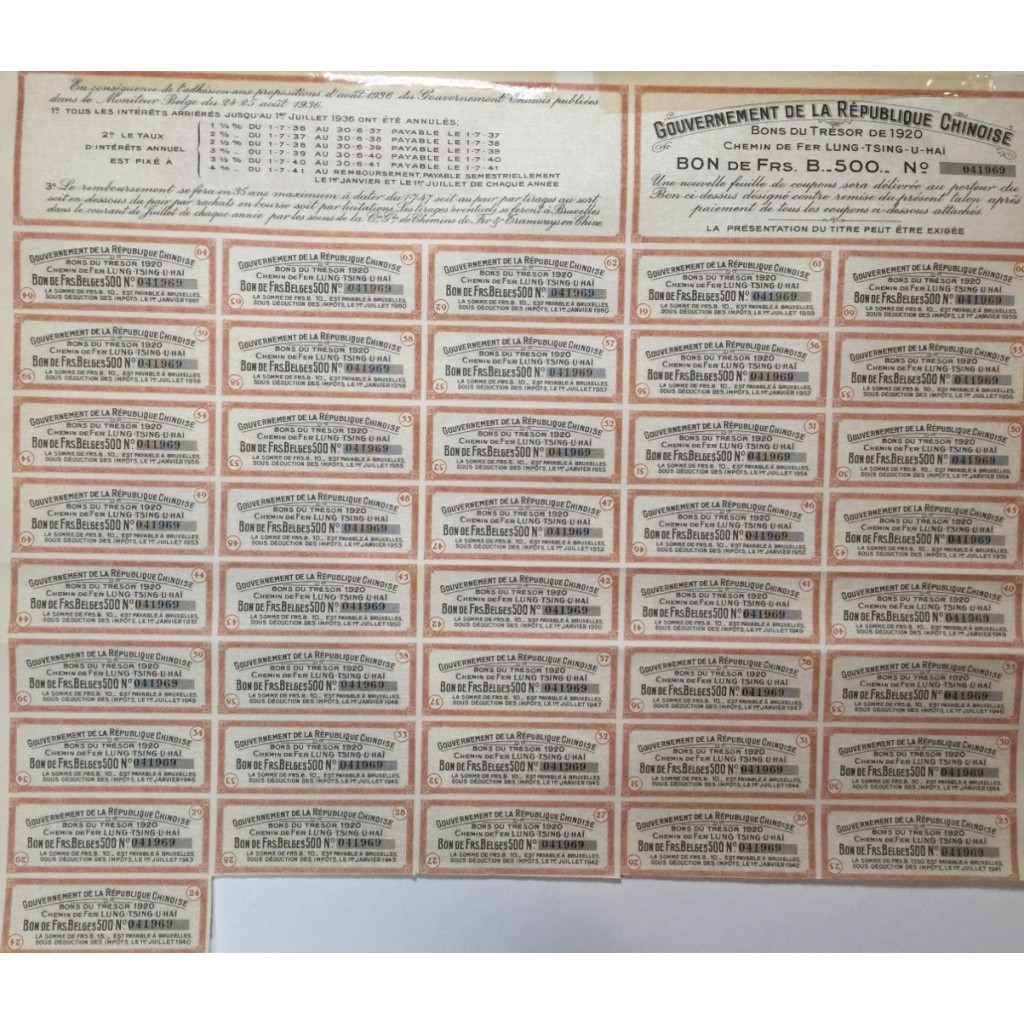 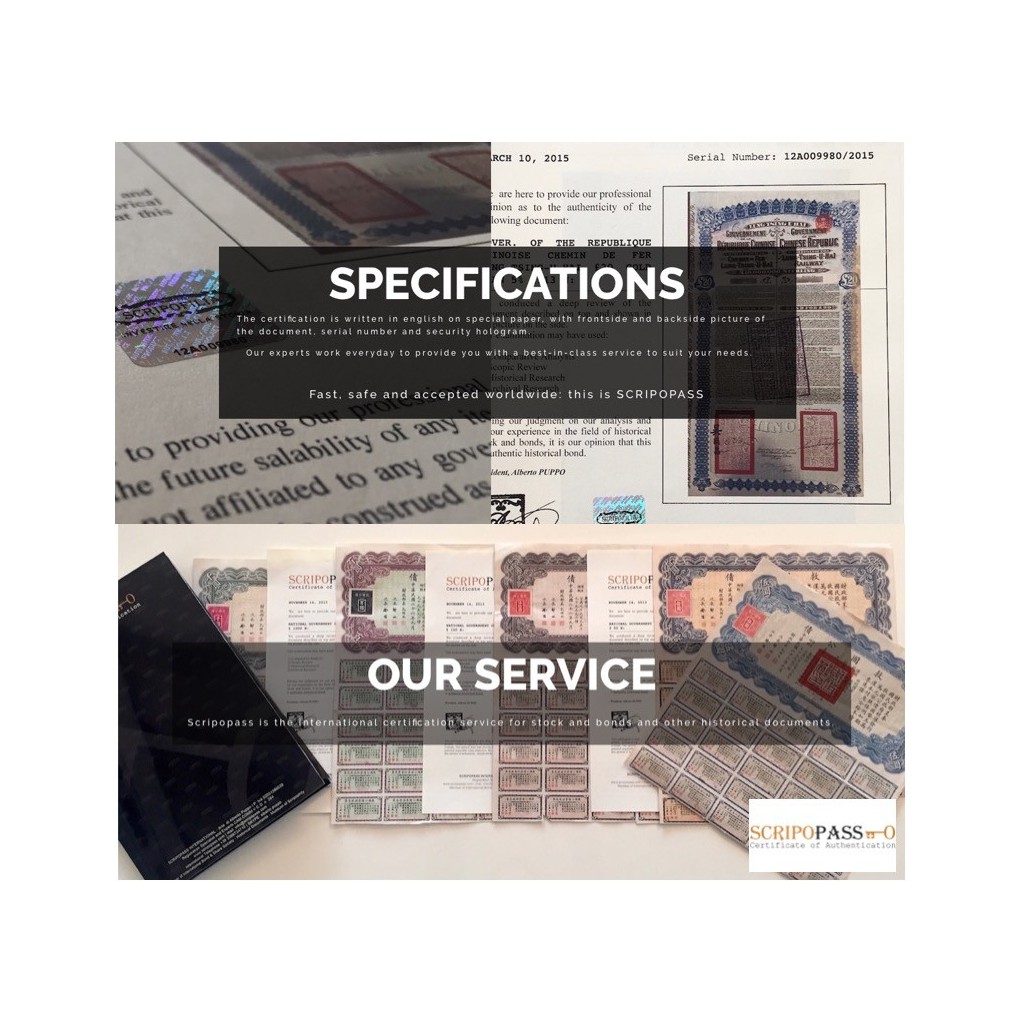 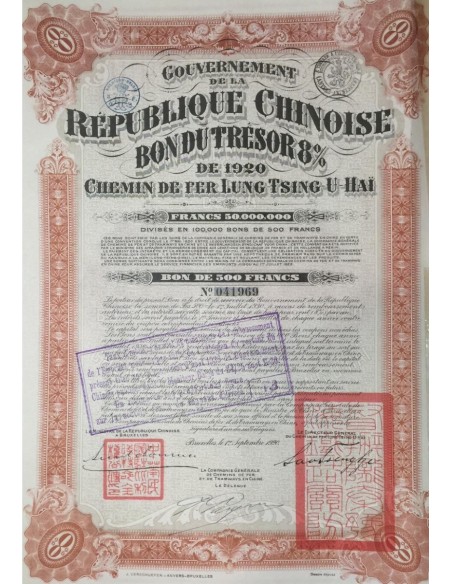 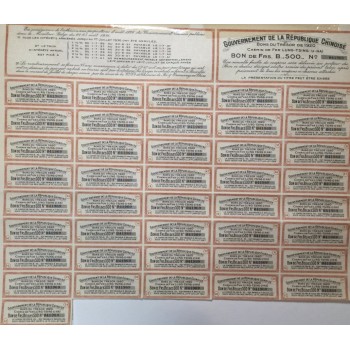 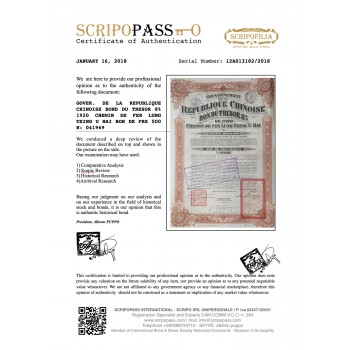 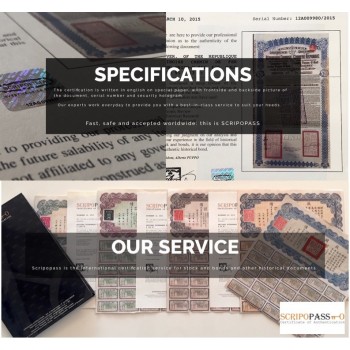 The photographs are not contractual. - The item shipped  with other serial numbers than presented.

The financing was remarkably international for the day.

Issued in Brussels, the bond certificate is printed in both French and English, while the loan is denominated in British pounds sterling.

The historic bond was issued by the Government of the Chinese Republic right after its formation.

The bond remains in near flawless condition with the coupon sheet still attached.

The Lung-Tsing-U-Hai Railway Loan of 1920 was created by virtue of an agreement dated the 1st May 1920 between the Government of the Chinese Republic, the Compagnie Generale de Chemins de Fer et de Tramways en Chine and the Netherlands Syndicate for China. The agreement was notified by the Ministry of Foreign Affairs to the Belgian, French and Dutch Legations in Peking.

The participating financial institutions were the Compagnie Generale Chemins de Fer et de Tramways en Chine on behalf of the Netherlands Syndicate for China and the Nederlandsche Maatschappij  Havenwerken.

It is interesting to note that Wilhelm Kuhlmann recorded each of the above bond issues as five separate loans. However, a study of the actual bonds shows that all of the above bonds and capital sums were floated pursuant to the same loan agreement dated 1st May 1920 and were all for the same purposes. Bearer bonds were issued as shown on the table above with different designs to denote Belgian or Dutch bonds.

The purpose of the loan was for the completion of the western section of the Lung-Tsing-U-Hai Railway from Kwanyingtang to the Yellow River and also the eastern section from Hsuchow to the sea; for the development and construction of a harbour in close proximity to Haichow and for meeting the financial commitments to service previous loans issued in 1913 for the Lung-Tsing-U-Hai Railway.

The loan was secured by a first charge on the Lung-Tsing-U-Hai Railway. Coupons were payable on 1st January and 1st July each year. The loan went into default in 1925, but further to an agreement made in August 1936, the loan was reactivated. The terms of the loan were altered and were re-negotiated. The new terms published in the Moniteur Belge on 24th and 25th August 1936 and in  Times of 26th August 1936 are shown the opposite.

New coupon sheets were issued, but the loan once again went into default in 1939.