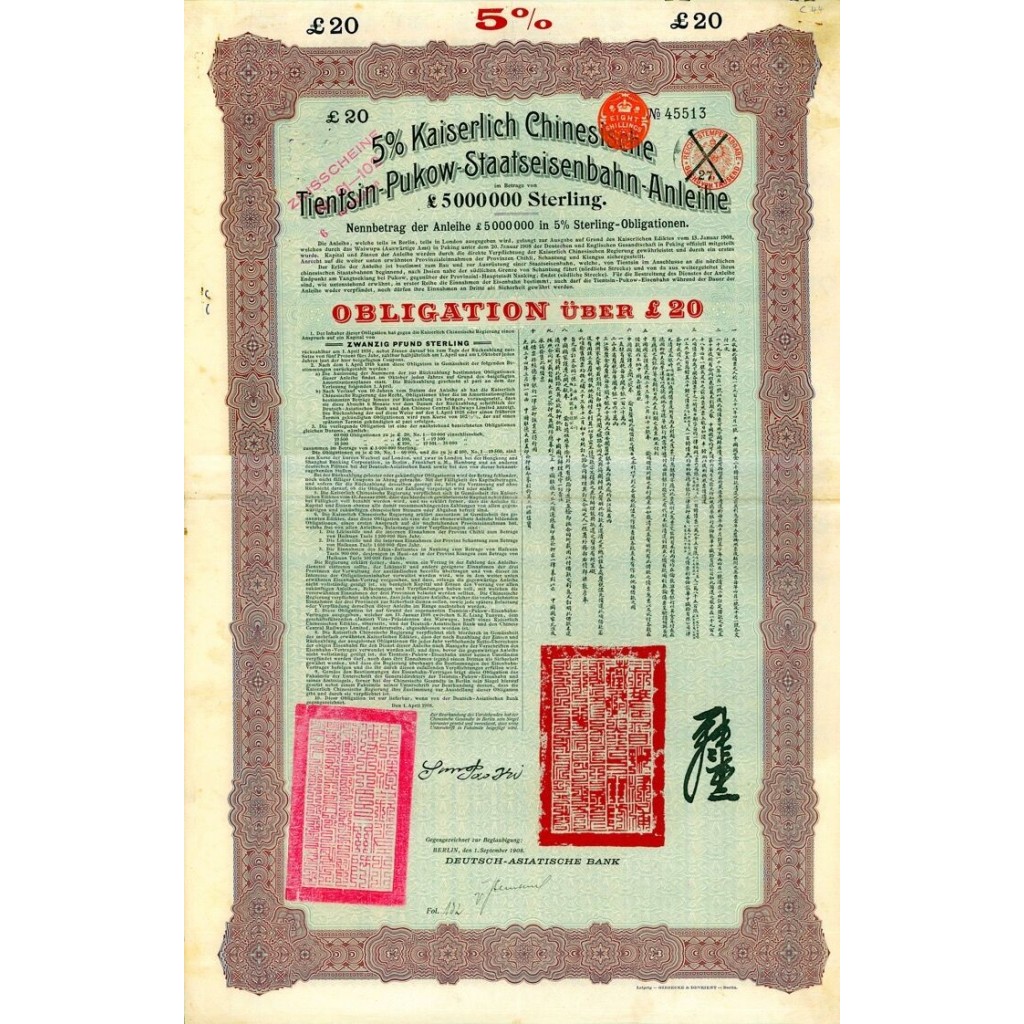 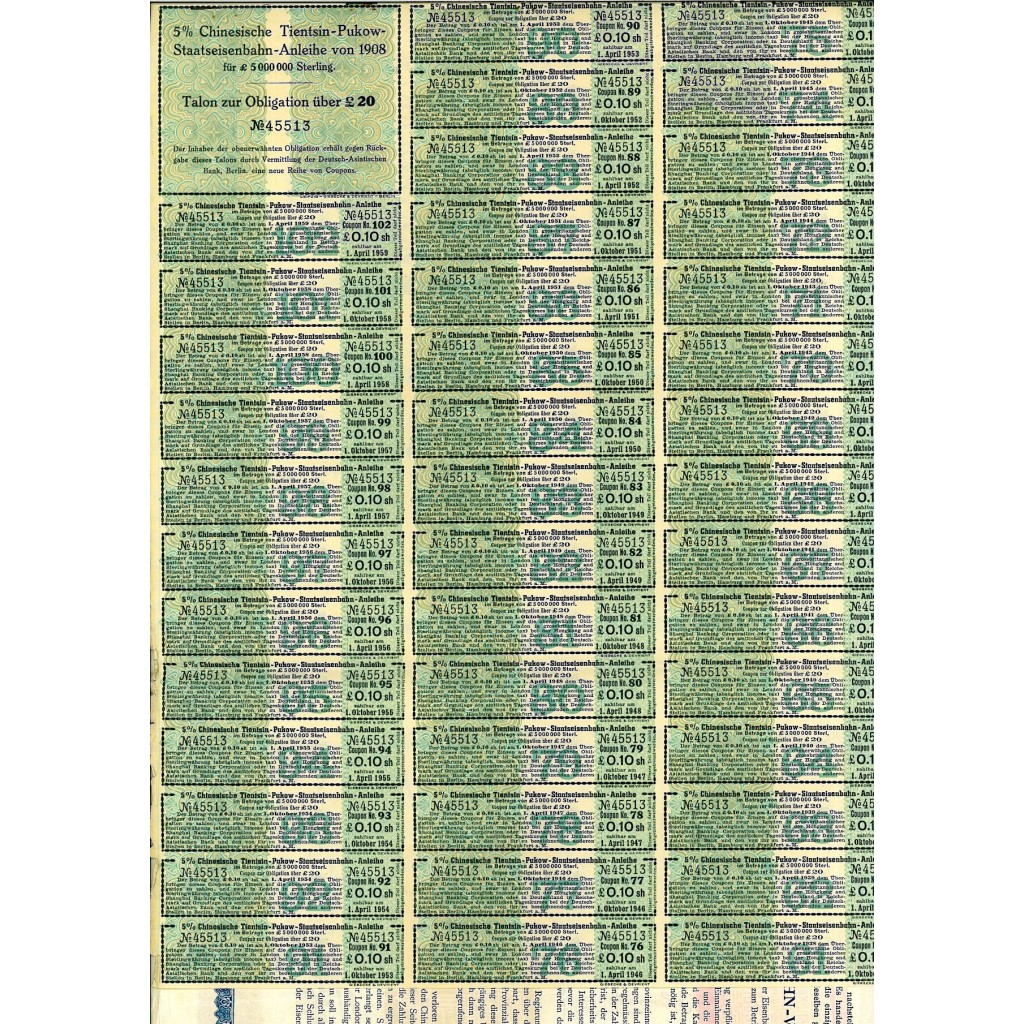 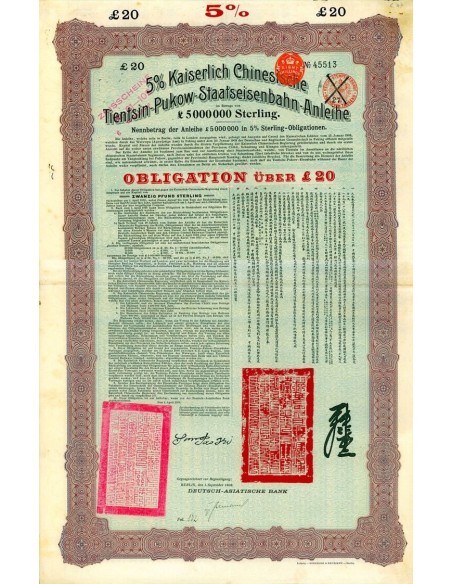 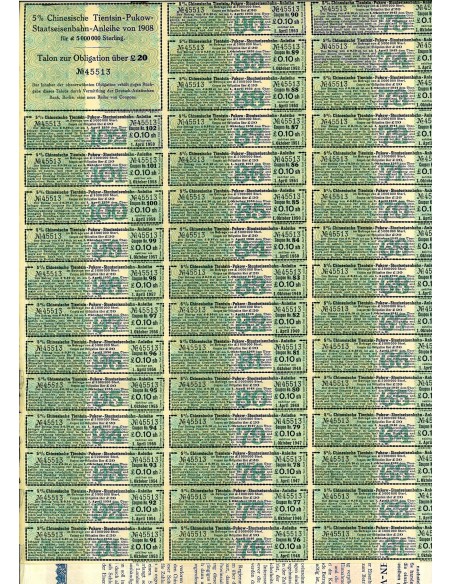 The Tientsin-Pukow Railway Loan of 1908 was for the capital sum of £5,000,000. The loan was “…authorised by Imperial Edict of 13th January 1908 officially communicated by the Wai Wu Pu1 to the Ministers of Great Britain and Germany in Peking. Guaranteed as to principal and interest by the direct obligation of the Imperial Government of China and secured by a first charge upon certain provincial revenues of the provinces of Chili, Shantung and Kiangsu.”

The participating financial institutions which handled the arrangements for the issuance of bearer bonds against the loan and which counter-signed the bonds were the Hongkong and Shanghai Banking Corporation in London and the Deutsch-Asiatische Bank in Berlin. The Hongkong and Shanghai Banking Corporation was responsible for 37% of the loan, while the Deutsch-Asiatische Bank was responsible for 63%. Bearer bonds were offered at 98½% in London and Berlin during 1908 and again in London and Berlin at 100% in 1909. The various denominations issued by these two banks are as detailed in the tables above.

The purpose of the loan was for the construction of a railway from a location close to Tientsin which would connect the Imperial Railways of Northern China to Ihsien near Baoding and the southern frontier of Shantung province, and from Ihsien to a location near Pukow on the  River.

Coupons were payable on 1st April and 1st October each year.

The Tianjin - Pukou or Jinpu railway (simplified Chinese: 津浦 铁路; traditional Chinese: 鐵路; pinyin: Jīnpǔ Tiělù) connects Tianjin to Pukou outside Nanjing in Jiangsu province.In September 1898, during a conference in London, the British and German capitalists decided to build a railroad from Tianjin to Zhenjiang. In May 1899, the Qing government accepted the financing of railway construction along with a series of bank loans. In 1908, the plan for the railway line was changed from Tianjin to Nanjing, in the Pukou district, which is located on the north side of the Yangtze River. The construction of the railway began in 1908 and the Tientsin - Pukow railway was completed in 1912. Altogether, the original railway line was built with 85 stations, of which 31 in Shandong province.Rail traffic had to be transported across the Yangtze to Nanjing to connect with the railways that crossed that city until the Nanjing Yangtze River Bridge was built across the river in 1968. Currently, it is the main section of the Jinghu railway.