The Mexico City chapter is divided into four parts.
Go to
Part 2: Early Electrics
Part 3: After the Revolution
Part 4: The STE in Color
Part 1: Animals, Steam and Gasoline
Mexico's federal capital sprawls across 3,000 square kilometers (1,160 square miles) of the Valley of Mexico, a plateau at altitude 2,250 m (7,350 ft) that is surrounded by mountains and volcanoes that reach 5,490 m (18,000 ft). Before it was drained in 1607-1608, the valley was the site of Lake Texcoco. The central core of today's Mexico City - an area bounded roughly by Ejes 2 Norte and 2 Oriente and Avenidas Insurgentes, Chapultepec and Izazaga [see map of central region] - was built on the ruins of Tenochtitlán, the Aztec capital established on an island in Lake Texcoco in 1325. Most of today's city is in Mexico's Federal District (Distrito Federal), but population has recently spread north, east and west into neighboring México state - and now approaches 20 million inhabitants.
Mexico City was the terminus of the country's first steam railroad and the location of its first animal-powered streetcar line, which was the first tramway in Latin America and one of the first in the world [see Tramway Pioneers].
The first steam railroad, built to connect the capital with the port of Veracruz, opened a 9 km segment at the Veracruz end in 1850. The second segment, 4.5 km long, from Mexico City to Villa de Guadalupe shrine north of town, began operation from Tlatelolco station on 4 July 1857 [see milestones map]. Steam trains began running down Calles Comonfort and Lázaro Cárdenas to a new station at Villamil on 28 February 1858. While that station was under construction, for an 11-week period beginning 12 December 1857, horsedrawn trams carried passengers between Tlatelolco and Villamil, a distance of 1.8 km [see 1 on map]. This may have been the first animal tramway operation in Mexico [see below]. Tlatelolco and Villamil stations closed when steam trains began using the new Buenavista station in 1867 [see map].
Franchises for the construction of a permanent street railway were awarded in 1840, 1849 and 1852 - without result. Finally, on 13 August 1856, a Texan named George Louis Hammeken secured a concession to build a passenger tramway from Plaza de la Constitución - the square, also known as the Zócalo, in front of the cathedral - west to the Alameda and Plaza de Toros (bull ring), then south on Avenidas Insurgentes, Oaxaca and Tamaulipas to Tacubaya [2 on map]. Hammeken ordered tramcars and other materials from the United States and inaugurated the Ferro-Carril de Tacubaya on 1 January 1858. [Some sources claim that operation began in September 1857; others say December 1857 or February 1858; see BIBLIOGRAPHYbelow.]
No illustration of the inauguration ceremony could be found, but the document below, dated 30 May 1860, shows the schedules and fares that were charged two years later. The artist who drew the vehicle had probably never seen a tram; such images were common on documents of the era [Electra, 1/1926 - see BIBLIOGRAPHY]: 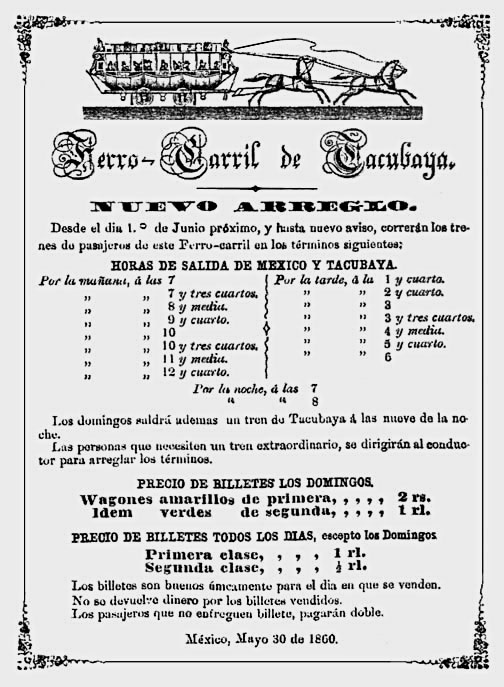 The "New Regulation" indicates that the first class wagoneswere painted yellow and the second class green. A tram was also called a tren (train) since the word tranvía did not yet exist. Some of the trips may have been by train: to accommodate crowds on weekends FCT used a steam locomotive to pull several cars in tandem on the section south of the tram depot on Av. Insurgentes [see map].
The engraving below, from the 1870s, shows two FCT cars passing the bull ring on Calle Rosales. The vehicles are the type that was built in the 1850s by Eaton Gilbert & Co. in Troy, New York. They were also running at that time on the streets of New York, Boston, La Habana and Santiago de Chile [col. Instituto Nacional de Bellas Artes, Mexico City]: 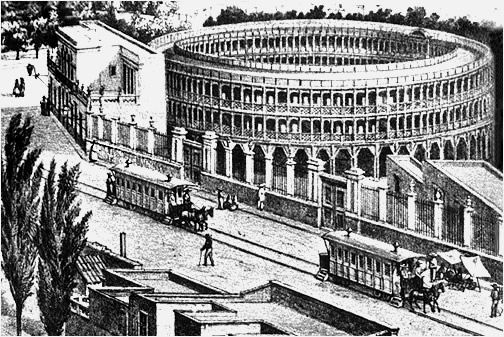 In 1865 another company, Ferrocarril de Chalco, opened another tram line to Tacubaya, via Av. Chapultepec [3 on map]. It also employed both animal and steam traction and was extended to San Angel and Tlalpan in 1869 (but never reached Chalco, 30 km southeast of the city). In 1876 the Ferrocarril de Tacubaya built a branch to Popotla along the Calzada México-Tacuba that had been laid out by the Aztecs 500 years before [4 on map].
The only photograph that could be found of trams in this period is the rather mediocre one below. Its exact date is unknown, but the location is probably a corner of the Zócalo [see map] [col. Héctor Lara Hernández]: 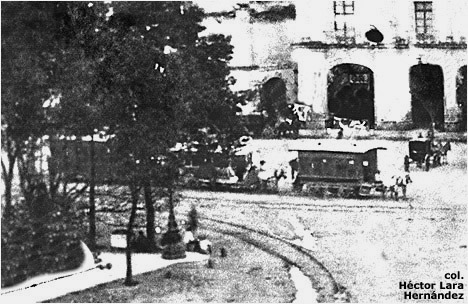 The Empresa de los Ferrocarriles del Distrito Federal, organized in 1878, blanketed the city with horsecar lines [5 and 6 on map], including a direct route to Tlalpan via Av. San Antonio Abad (Calzada de Tlalpan) [7 on map]. Another company, Empresa de Tranvías con Correspondencia, laid a competing grid in the central area and the Ferrocarril del Valle built yet another tram route to Tacubaya [8 on map]. The EFDF maintained the 1435 mm gauge of the earlier horsetram lines, but the ETC and the FV laid their rails to 914 mm (3 ft) gauge.
Most of the trams that ran in Mexico City in the 1870s, 1880s and 1890s were built by John Stephenson Company in New York. The Stephenson parlor car shown below was used by Pres. Porfirio Díaz [Electra, México, 1/1927, p. 6]: 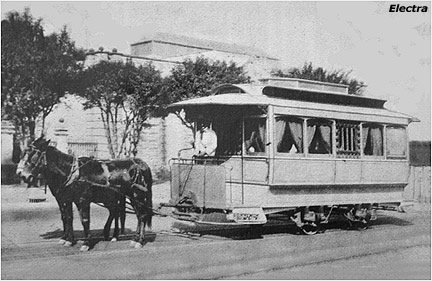 The Compañía de Ferrocarriles del Distrito Federal reorganized in 1882 and absorbed most of the tram lines in the city. By 1890, 3,000 mules and 55 locomotives were pulling 600 passenger trams and 790 other cars on 200 km of track. Streetcars ran from Tlalnepantla far north of the city to Tlalpan on the south and Peñón on the east [see area map]. There was an elaborate service of funeral trams, to transport the deceased to the cemeteries on the west side of town. An 1898 article [see BIBLIOGRAPHY, below] speaks of prices from $3 to $140 (a lot of money in 1898). This photograph shows the $3 car [col. Juan Viladroza]: 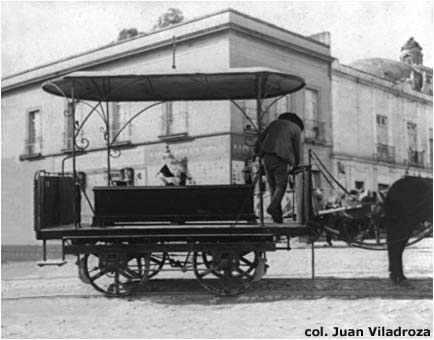 In this postcard a Stephenson car waits at the tram station on the Zócalo. The cathedral in the background, constructed between 1573 and 1681, is the largest in the western hemisphere [col. AM]: 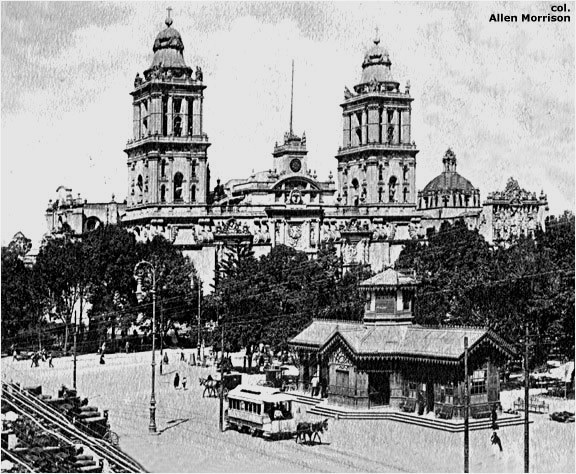 Electric streetcars began running in Mexico City in 1900, but animal traction continued on several lines for another three decades. Some of the cars were fitted with gasoline motors, but the last petrol tram ran from Azcapotzalco to Tlalnepantla [see area map] in 1934. The last horse tram, number 2133, made a final run on the Granada line - a few blocks east of the Zócalo - on Thursday 24 November 1932 [see 11 on map]. An orchestra played Chopin's Funeral March (opus 28, no. 20). The gritty photograph below recorded the event [Electra, México, 11/1932, p. 21]: 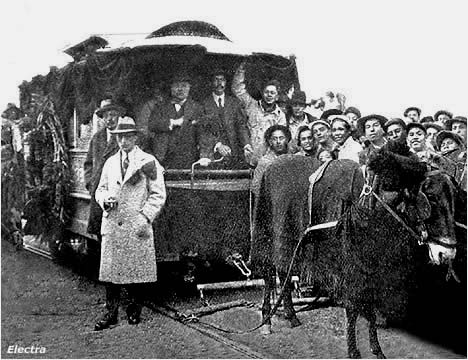 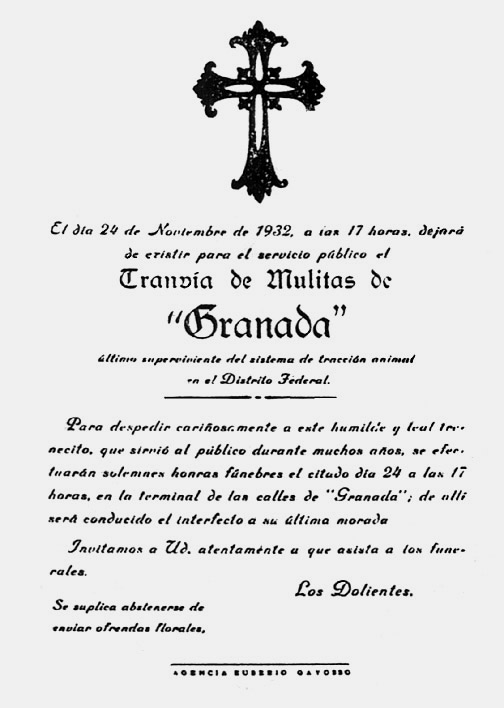 ["The Granada horsecar, last survivor of the animal traction system in the Federal District, will terminate public service at 5 pm on 24 November 1932. To say fond farewell to this humble and loyal little car, which served the public for many years, there will be a solemn funeral ceremony at 5 pm on that day, at the end of the line in Granada. The victim will be led from there to its final resting place. We invite you to the funeral. Please do not send flowers."]
Tram 2133 was preserved at the museum of the Convento de Churubusco, known today as Museo Nacional de las Intervenciones.
BIBLIOGRAPHY (in order of publication)