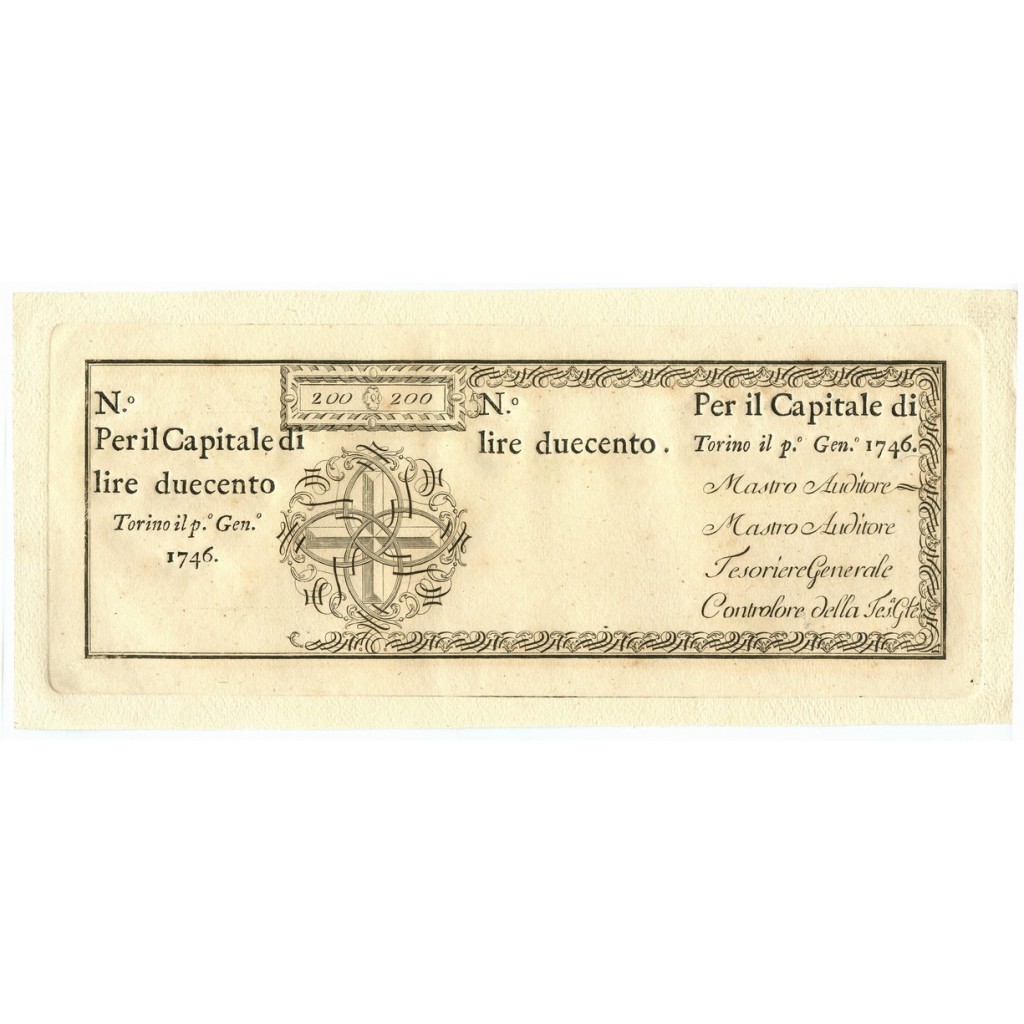 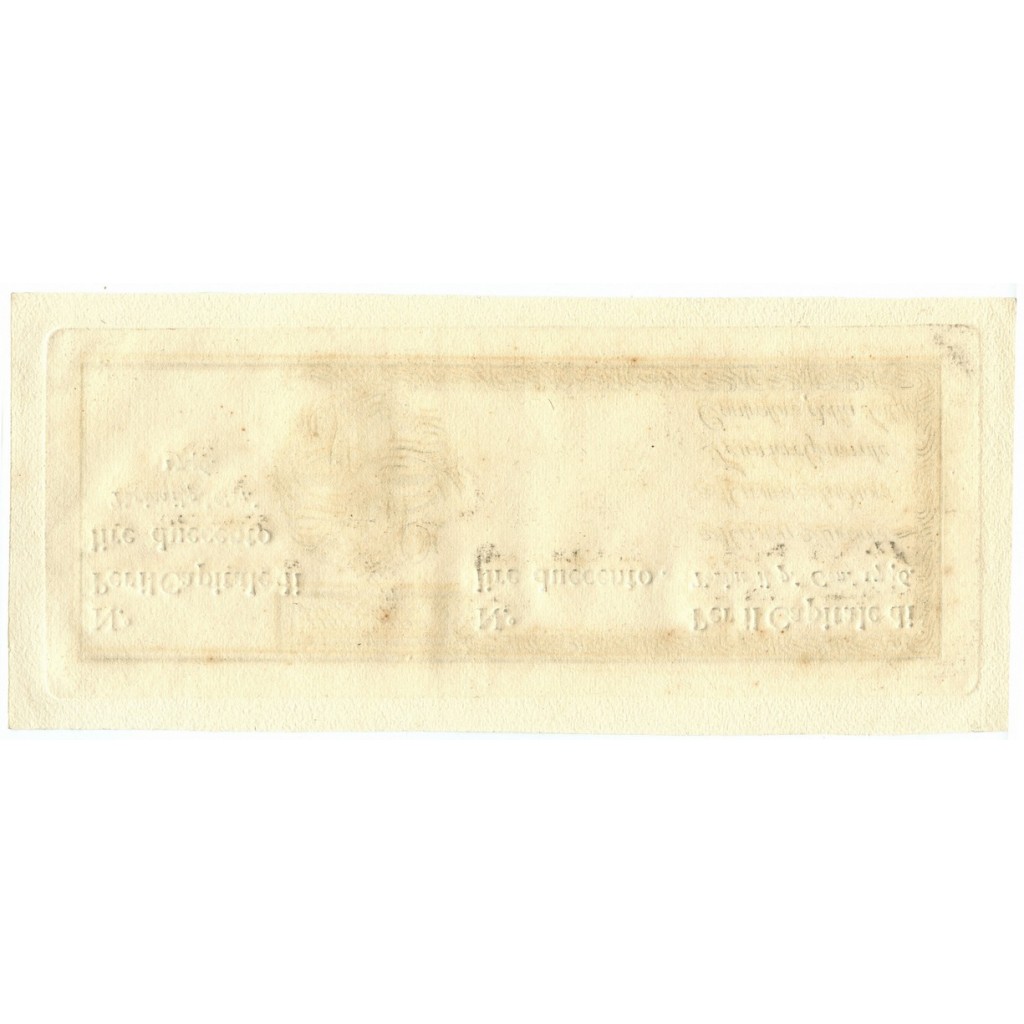 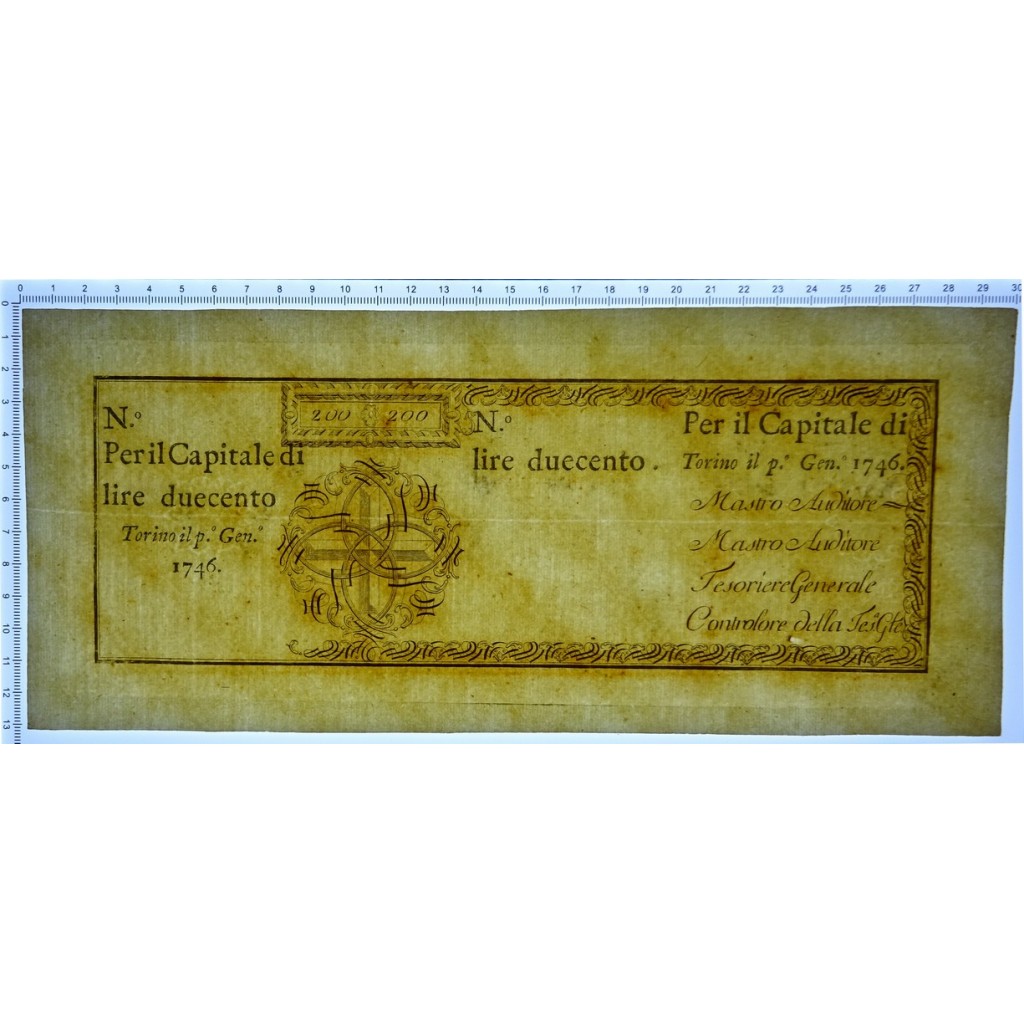 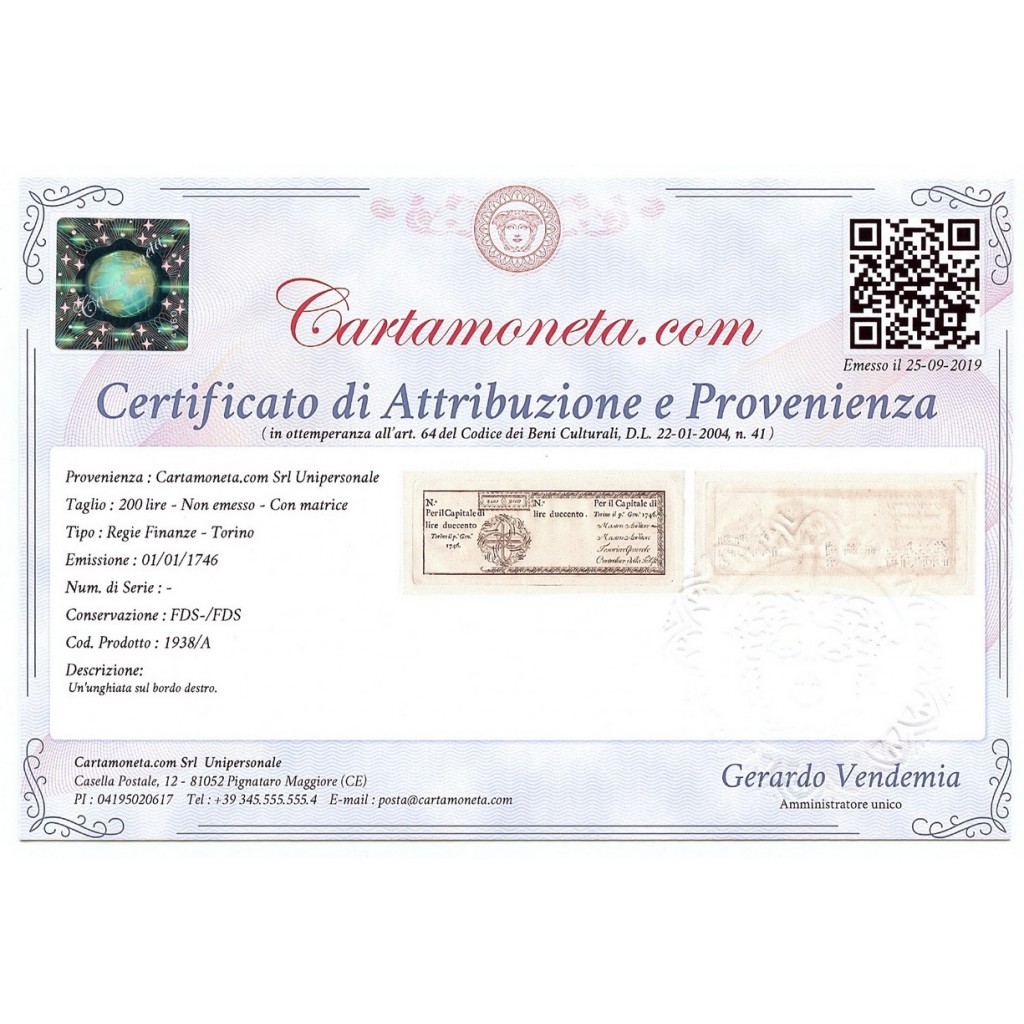 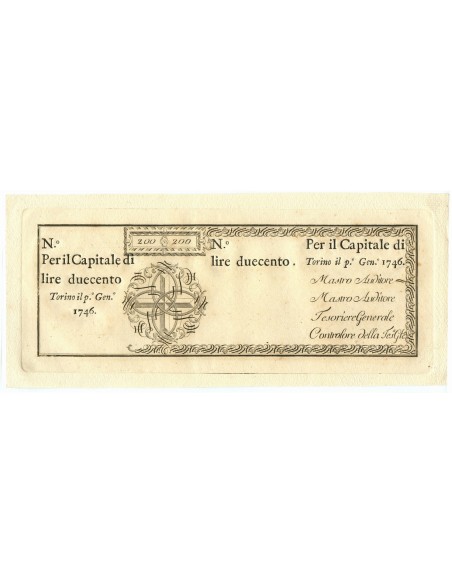 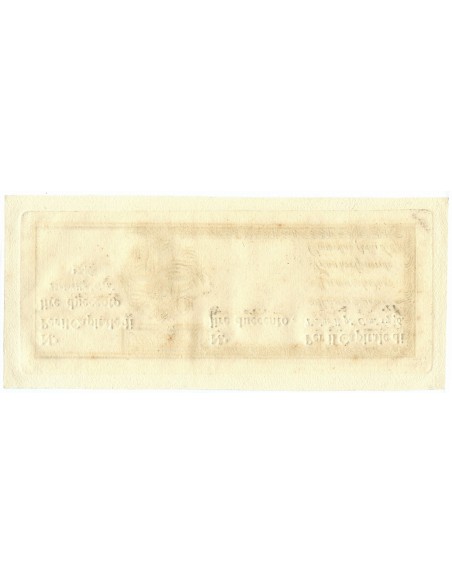 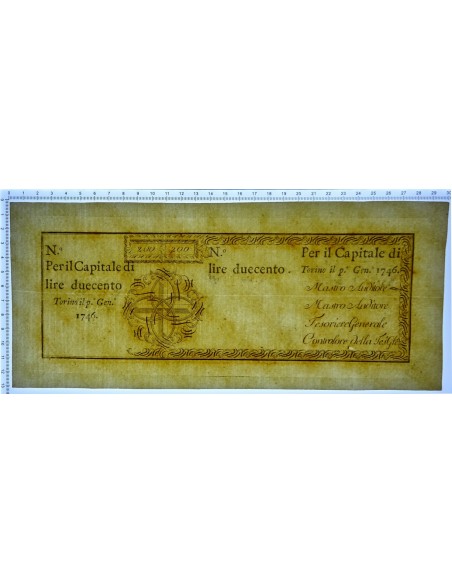 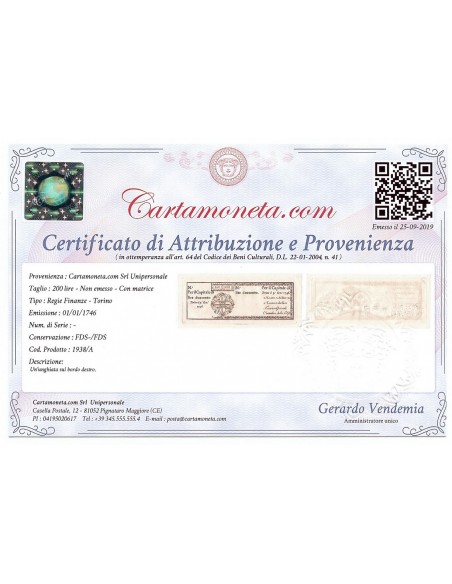 The issue of the first series of banknotes of the Royal Finances of Turin is approved on 26 September 1745 under the regency of Carlo Emanuele III and bears the date of 1 January 1746. It is the first time that one of the Ancient States in Italy puts into circulation paper money.

There are cuts of 3000, 1000, 500, 200 and 100 lira, all very high amounts for the time, but as mentioned, the press is due to the need to raise funds for the war against France and Spain. Tickets earn a 4% interest with a 4-year maturity. This first issue, destined more to finding funds than to circulation, will be followed by others, within which there will be ever smaller cuts that are better suited to circulation.

The tickets of the Royal Finances, following the French invasion of Piedmont, remain in circulation until July 28, 1800 and go into prescription five months later.

The over forty years of the reign of Carlo Emanuele III, which extends from 1730 to 1773, are full of important events and leave a fundamental mark in the history of the eighteenth century, also affecting the events of the following century.
Carlina's foreign policy is similar to that of Vittorio Amedeo II: alliances alternate in an unscrupulous manner, aiming at the progressive unification of the Piedmontese territory under the Savoy dominion. The court is Italianized not only in the language or customs, but above all because it sees the only possibility of expansion right towards the Po valley and, in the coming century, towards the entire peninsula. With this aim Carlo Emanuele III intervenes in the wars of succession - first the Polish one, then the Austrian one - finally succeeding in reaching the coveted territorial unification started by the father. The war for the succession to the throne of Austria ends the treaty of Aachen (1748) which ensures the substantial unity of the Piedmontese territory for the Kingdom of Savoy.
This increased political importance, however, is not accompanied by a corresponding improvement in the living conditions of the Kingdom of Savoy, which, although more powerful on the European scene, has remained remarkably poor, lacking in significant productive and commercial resources and, despite the prudent management, with limited financial possibilities.
Carlo Emanuele III inherited a relatively flourishing public financial situation from his father. The state budget is active and constantly growing: about 7 million lire in 1680, 9 million in 1700, 13 million in 1721 and 15 million in 1730, according to reports by M. Ruggiero. The income of the Savoy finances in the mid-eighteenth century is estimated by M. Abrate to be around 20 million lire, of which over 65% is generated by tax revenues on private assets. Despite the numerous wars waged by Vittorio Amedeo II, his prudent financial conduct meant that the public debt in 1730 was relatively small and proportionate to the economic possibilities of the State: 17.4 million lira for the tax exemption and 3,100,000 lire for the sale of the securities of Monte di S. Giovanni.
Despite the solid financial situation inherited from his father, the Savoy participation in the succession wars is financed above all by resorting to credit, both internal and international. It is therefore inevitable that during the reign of Charles Emmanuel III the public debt will grow dramatically. In 1764 the titles of the Monte di S. Giovanni exceed the remarkable figure of 41 million lire, which entails an annual cost for the treasury due to the interest paid of around 1,600,000 lire.
The economic policy of Carlo Emanuele III leads to an increase in wealth linked to the movable property due to the increased public debt: in the middle of the 18th century, income not derived from agricultural activities contributed over 16% to the global income of Piedmont. Nonetheless, the wealth of the citizens of the Kingdom of Sardinia remains above all real estate, even if the average income per capita improves, albeit modestly: equal to 62 lire in 1700, it reaches 70 liras in 1750. Towards the end of the century, G. Prato estimates the total assets of the wealthiest Piedmontese families, about 1000, capable of contributing to the Treasury of the Kingdom, more than half of whom resided in the capital, Turin, at around 320 million lire.